Parker Pup loves his work: He wears his Pet Partners vest as he visits hospitals and cancer centers as a therapy dog. – photo used with permission

Parker is a talented dog actor and a handsome dog model. But more importantly, Parker is an incredible therapy dog.

A Golden Retriever, Parker stands 23 inches at the shoulder. His eyes are deep brown. His coat is golden. Everything about this dog is huggable and he gets lots of cuddles when he’s on the job.

Parker loves the hugs and now, he needs your votes.

Parker is in the running for the 2014 AMERICAN HUMANE ASSOCIATION HERO DOG AWARDS Therapy Dog. You can vote every day for him until the end of June. 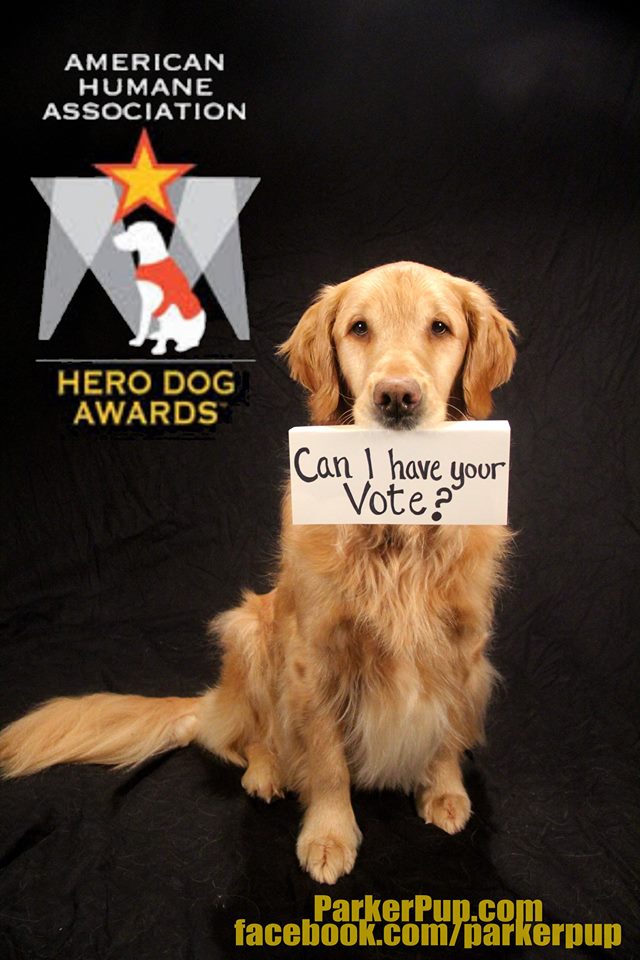 Parker – Parker Pup – is asking for your vote. He is in the running for Therapy Dog Hero in the 2014 American Humane Association Hero Dog Awards. – photo used with permission

As an 11-month-old Golden Retriever he earned his CGC (Canine Good Citizen) Certificate. Later he passed his evaluation with Pet Partners, formally known as Delta Society and became a registered therapy dog.

His human mother, Jennifer McFarling, says the other half of the Parker therapy team, and her and Parker’s inspiration, is her dad, a cancer survivor. In 2006 Jennifer wasn’t sure she would have her father for long.

“When you’re faced with a diagnosis like that you tend to do a lot of bargaining,” Jennifer said, “and I always said if I was in a position to help the cause someday I would pay it forward. So we did that with training toward a complex-approved therapy team, as well as raising awareness about cancer in general.”

Jennifer’s father is cancer-free today and she and Parker are paying it forward. 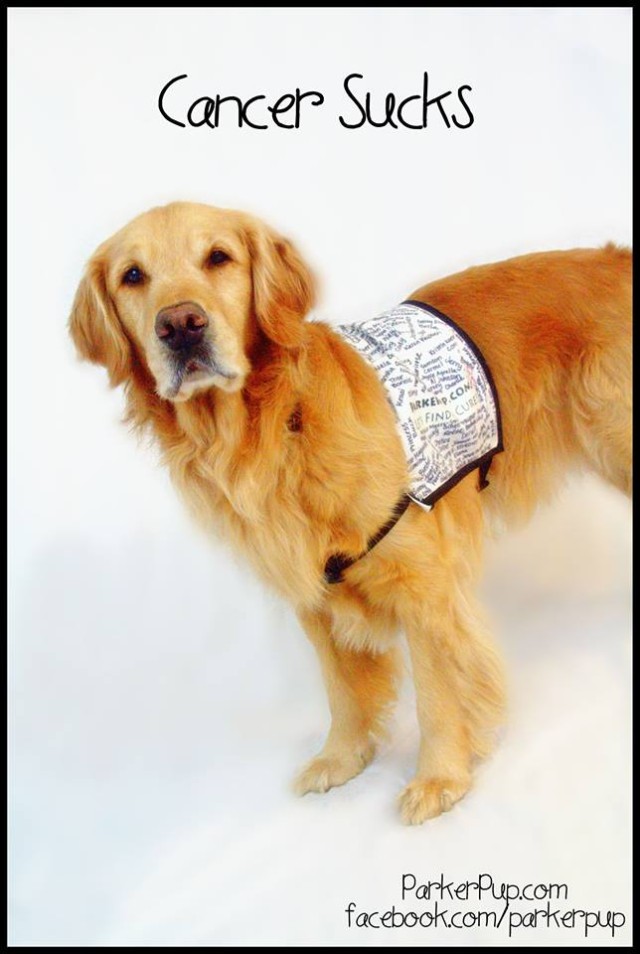 Parker Pup models the vest he wears on cancer walks in which he carries the names of more than 2,000 people and animals who have battled cancer. – photo used with permission

Parker walks for cancer with Jennifer’s father. On the walks he wears a vest that carries the names of more than 2,000 people and animals who have battled cancer.

“My most important job in life, other than being part of a loving family, is to be a therapy dog. I work with cancer patients and also with children learning to read.

“I also work to raise funds and awareness for cancer prevention, treatment & hopefully a cure. I raise funds for Morris Animal Foundation, The American Cancer Society, and various other non-profits.”

Want to learn more about Parker? Visit his website or check him out on Facebook. Or, watch him walking for cancer.

Don’t you agree that Parker is a real dog hero? If so, please vote for him right now. It just takes a few seconds.