My father, Edward Love Johnson, is the old man.

For years Dad tried to “save” us from ourselves. Every time a stray dog would show up we would take it in. He would try to “run them off” before we discovered the new arrival. It never worked. 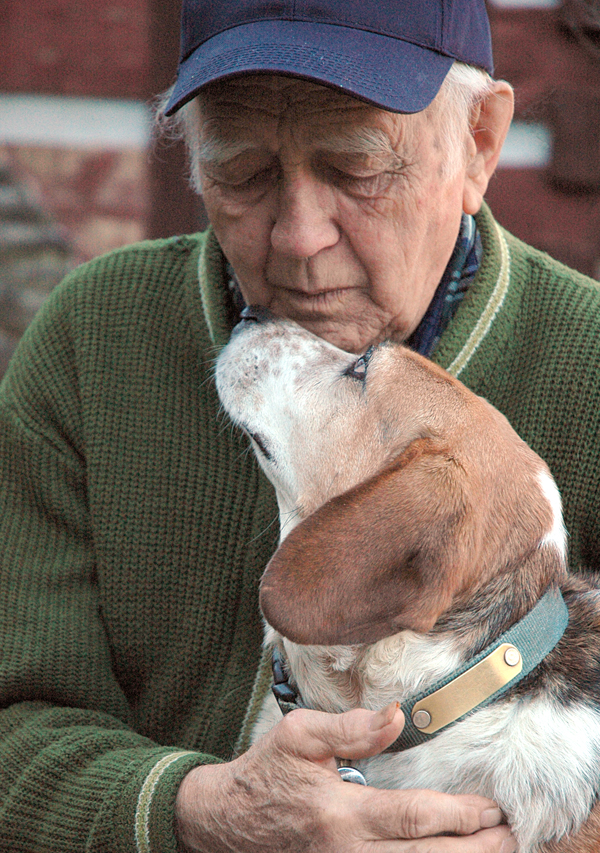 Devoted to each other: Edward Love Johnson, and his much loved Beagle, Killer.

One time he fed, then loaded up a Beagle and drove her a couple miles down the road. To his thinking we were already over our limit of dogs. I don’t remember just how many we had at the time. Dad was “saving” us from taking in another. It didn’t work out exactly as he planned.

That evening, I stopped at his house on my way home as is my habit. (He lives at the end of our long driveway.) Curled up in the tall grass was a Beagle. I picked her up and put her in the cab of my truck and promised to return soon. I mentioned her to Dad. He laughed and he told me that he had taken her down the road after feeding her.

The Beagle stayed. We named her Rosie. But Rosie is not “the Beagle” of this story.

Sometime after Rosie, another Beagle appeared near the end of the driveway. She was in seriously bad shape. Terribly thin, downtrodden, and not sure she could trust us.

I took food to her.

JP, my husband, took food to her.

Both of us were concerned that Dad would try to “run her off” to save us from ourselves. It had never worked before. But this gal was in such poor condition, we were afraid she just might give up on life.

Finally, she allowed JP to touch her. So he picked her up and started toward home. He didn’t get far, however. Dad came outside and wanted to know where JP was taking “his dog.” Dad confessed that he had been feeding the Beagle.

JP took her back to Dad and came home smiling.

The Beagle began with a blanket on the porch in the door alcove. Not good enough. Dad built her a dog house right there by the door. Still not right. He opened the front door and Killer moved inside where she belonged.

Dad named her “Killer.” Go figure. She was a sweet gal.

When I took her in for a vet check. Ginger, the woman who ran all things at the vet’s office, said “Killer” was not an appropriate name for a little Beagle. I said she was sweet. Ginger put “Sweetie” down as her name. From that day, the homeless Beagle that was rescued by the old man, had two names — Killer and Sweetie.

The Beagle in need and the old man in need

Killer was a Beagle in need of love and shelter. She found both. And, she found her hero.

Dad was in need of someone to love, someone who needed him. Mom had died suddenly just a month after their 50th anniversary. For many years she had been a semi-invalid and Dad was her devoted caregiver. Without her he was lost in more than one way.

Having suffered the loss of his life’s partner while in recovery from triple by-pass heart surgery he struggled to keep going. He was not only alone in his log house, he was lonely.

The old man and the Beagle on the move

Before long Killer had coaxed Dad into taking walks. He was back in the woods. A self-educated naturalist and a man who had grown up on a farm and roaming the Allegheny Mountains, he was back in his element. Both the old man and the Beagle flourished.

One day Dad told me I had taught him something. I waited in silence for an explanation. It came.

He said he now understood why JP and I had taken in so many dogs that others had discarded. He understood the love. He understood how a dog becomes a part of your life. Killer, the dog known as “Sweetie” at the Vet’s office, had burrowed deeply into his heart. And, the man who had tried to save JP and I from taking in every “show up” dog was deeply in Killer’s heart.

The old man and the Beagle grow older

As Dad aged and slowed. Killer became his guardian. When he no longer took her up the hill and into the woods she accompanied us and our dogs. She loved those walks, those runs through the woods. But some days she refused to leave Dad. She knew he wasn’t feeling well. As much as she wanted to join the fun, she just couldn’t. Sometimes she would run up to our house and begin with the pack, but soon disappear to return to the log house and her hero.

They continued their walks in the meadow.

Dad developed congestive heart failure and Killer quit walking with us. She watched over her hero, checking on him if he coughed. She stayed close when he was not feeling well.

A sick little Beagle and the old man

Then one day Killer wasn’t feeling well and not much interested in food. JP and I were at Dad’s on our nightly visit. He mentioned that she had been coughing. I felt her throat. Her lymph glads were swollen.

Now he cared for Killer as she struggled to live. Special supplements. Special food. Chemo. And, for a while it worked.

Killer improved. She was out again. She went to the garden with him — running, happy.

However, the improvement did not last. As Killer’s cancer progressed Dad’s devotion grew even greater. He could not bear the thought of losing his “baby.” But even as she grew weaker she continued to watch over her hero. If he coughed she would struggle to her feet and go to him.

The Beagle had to leave the old man

Killer’s grave is in Dad’s garden in the shade between two fruit trees. He can sit with her. They are apart for now, but Dad knows he will see her again. 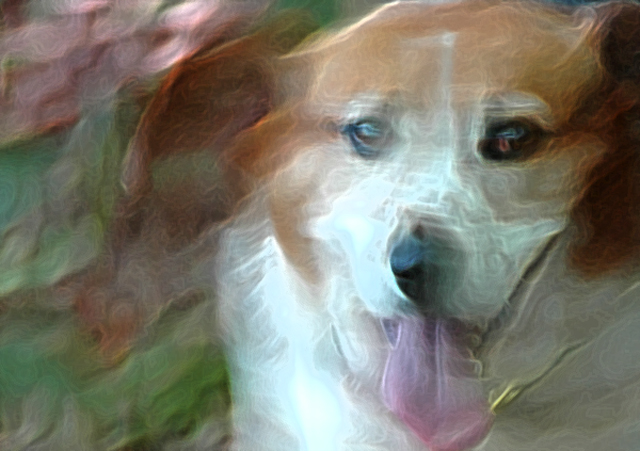 She came into my father’s life nearly dead – a starved and frightened Beagle. She died fat and much loved.

Dad was 96 when Killer died. Now 98, he still visits his little Beagle’s grave and sits with her. And, he still says: “She had a way of getting in your heart.”

Has a dog ever gotten into your heart?