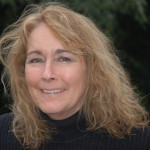 Rebecca Johnson has been in love with animals for as long as she can remember. As a child she had ponies and horses, frogs, foxes, a raccoon, a ground hog and even an opossum for a few days. Of course, she had dogs.

By second grade she knew she wanted to be a writer and finally, she combined her writing goal with her love of animals in her first published novel, “Gone: Cleo’s Misadventures,” the first in a series. The K9 Muse, she nows blogs on a slightly irregular basis.

A professor of journalism in the School of Journalism, College of Arts and Media, at Marshall University, Rebecca currently teaches digital media and writing. 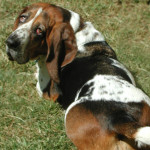 Cleo is the once bedraggled Basset Hound who hitched a ride to Rebecca and JP’s house and found her forever home.

Then, on a cold January afternoon Cleo made a little mistake. She took off on a fun deer chase that ended up being the real life misadventure which inspired the first book in the Cleo Misadventure series – “Gone: Cleo’s Misadventure” available in print and for Kindle at Amazon.

Cleo will, on special occasions, contribute to K9 Muse.

Richie Tipton is a graduate of Marshall University‘s W. Page Pitt School of Journalism and Mass Communications. He is a singer/ songwriter/ farmer/ runner and sometimes talk show host, by way of Asheville, N.C.

He and his wife, Amy, live on a farm in Cabell County, W.Va., where they breed KuneKune pigs and share their lives with six-dogs, and other farm animals.